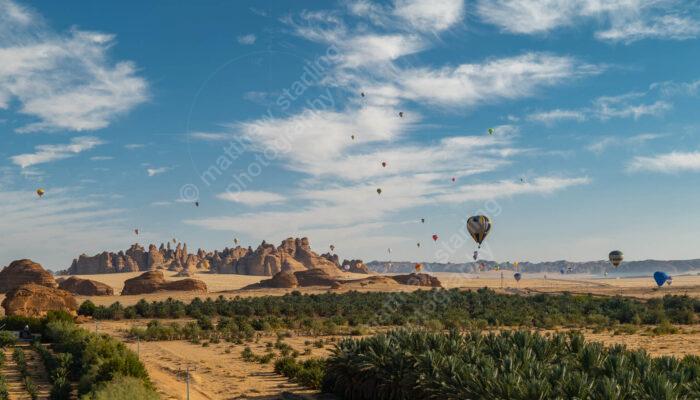 Winter at Tantora Festival is an annual festival held in the old town of Al-Ula, Al Madinah, located in the north west of Saudi Arabia. The festival began on December 21, 2018, hosting a series of concerts featuring world-class musicians as well as a balloon festival and historical, heritage and cultural sites.

The balloon festival opens in early January and lasts for only one week of the full Tantora Festival, that continues until mid March. Taking off during the early hours just north of the historical archaeological site of Mada’in Saleh, the flight path provides stunning aerial and panoramic views of the surrounding area.

The region has recently developed as the centre piece of Saudi Arabia’s new tourism vision attracting visitors from around the world. Visiting Al Ula during the winter months between December and March is the ideal time to explore the area. Trekking and hiking trails meander around peculiar geological formations. Huge canyons formed over millions of years dominate the almost martian like landscape.

Elephant Rock (also known as Jabal AlFil) is possibly the most prominent geological structure, located just a few kilometres from the old town of Al Ula. The free-standing sandstone outcrop has naturally eroded over hundreds of thousands of years, gradually morphing in to one of many geological wonders of Saudi Arabia. During the Tantora festival this huge weather beaten monolith serves as the centrepiece area for internationally renowned food stalls and cafes, as well as hosting live entertainment.

Winter Park serves as the main terminal for larger food stalls, information points, merchandise and transportation. From here the main bus routes around the festival site intersect allowing easy access to all of the main tourist sights. Make sure you give yourself plenty of time as the bus routes can be slow, depending on where you’re going and which direction the bus in travelling. The routes are all one directional to accommodate as many visitors as possible from the campsites and resorts within the festival area. Short trips around the site can therefore be slow and frustrating, as the buses only operate in a loop around the main sites.

Other impressive archaeological and heritage sights worth seeing are the Lion Tombs of Dedan, hundreds of rock art and wall inscriptions at Jabal Ikmah, the Lihyanite outdoor library. There is also the remnants of the Ottoman Hijaz railway at the site of Mada’in Saleh.