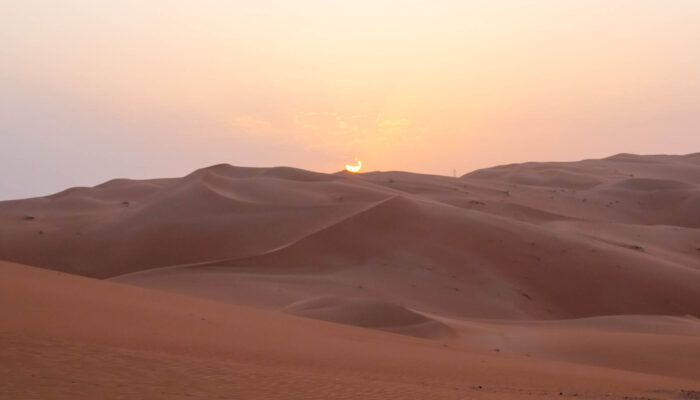 The Empty Quarter (Rub’ al Khali) is one of the most remote areas on the planet and is the largest continuous stretch of sand desert in the world. It covers an area of around 650,000 km² including parts of Saudi Arabia, Oman, the United Arab Emirates, and Yemen, and part of the larger Arabian Desert that occupies most of the Arabian Peninsula, the fifth largest desert in the world.

Desert tripping can be a lot of fun but also has its perils. It’s probably best to travel in a convoy with several experienced drivers. Even the best can get stranded on top of a sand dune. Without sufficient help and expertise around you it could easily be ‘Good Night, Vienna’. Being stranded in the desert at anytime of the year is not a something i’d recommend.

However, the winter months from around November to March are more than bearable, in fact the night time temperatures can fall to as low as freezing, while the summer months are for the professional expeditioners only. I’ve heard stories of breakdowns during mid-august, literally in the middle of nowhere. It was a lucky escape for those involved.

Smashing your Land Cruiser, Pajero or F350 across the desert is a lot of fun. Dune bashing can be a great way to spend a weekend but you’ll need a few extra items to avoid perishing in one the harshest environments in the world.

Just accept that you’re going to get stuck. It happens to the most experienced navigators. Tyre pressure should be lowered to allow for a larger tyre footprint on the sand. A set of portable sand tracks will help you out of a sticky situation, but a guy with a winch will probably be your best friend for the weekend.

On our trip the clear winners were the Toyota Land Cruisers. There’s not much these cars can’t handle and the dual fuel tank will give you much greater peace of mind of actually getting out of the desert.

The Mitsubishi Pajero was good but the absolute dune beast was the Ford F-350 Raptor. It did get stuck on top of a dune because of a much longer wheel base than the other cars. Driver error! The rest of the time it was winching almost every other car out of the sand. Everyones best friend for the weekend!