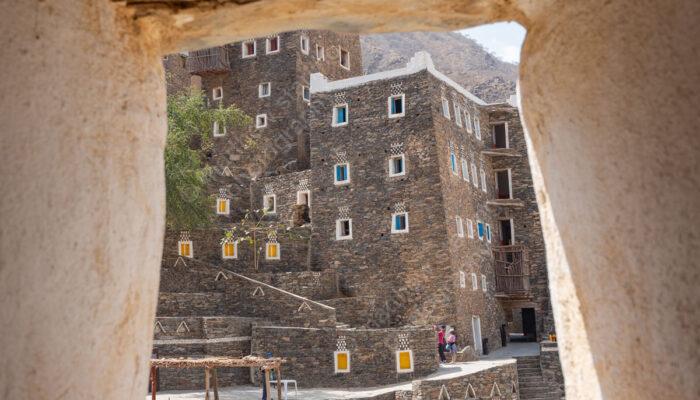 ​​​​​Rijal Almaa is an ancient village located in the Asir Region of Saudi Arabia, dating back to more than 5000 years. In recent times it has become a prominent landmark and tourist attraction within the region, located close to the city of Abha.

Home to around 60 multi-story buildings made of stone, clay and wood, Rijal Almaa was historically part of a natural trade passage that linked Yemen, Makkah, Madinah and the Levant, developing in to a regional trade center. The altitude of the village allows for a cooler and more habitable climate.

Our visit to the Asir region coincided with a trip to the Hanging Village of Habala featured here. We visited Rijal Almaa on the first day of the trip and spent time exploring the network of rooms within the interconnecting buildings. I managed to find an opportunity to shoot an extremely wide view positioned in front of the entire village. I say opportunity as there were so many people from our tour group exploring the site around me. This shot was only going to be possible by taking a sequence of photos stitched together using Photoshop.

I used the Panasonic G9 as this was already fitted with the Leica 8-18mm f/2.8-4. I shot the scene handheld rotating the camera pivoted as close to the nodal point as possible. The technique was a bit crude and not at all perfect. However, the shot was fairly opportunistic, also i didn’t have all the panoramic gear with me so this was really the only way. Camera settings were 16mm (32mm FF equivalent), f/5.6 at 500/s with ISO locked at 100. I also locked the focus and exposure throughout the sequence, as the lights levels already looked fairly even.

When i was able to properly process the photos i really wasn’t hoping for much. It was all a bit rushed. I generally use the Photo-merge function within Abode Bridge. Selecting this options opens Photoshop where the parameters for creating the panoramic image can be set. I almost always use the auto settings, with Blend Images Together selected. These are the main options to use. On occasions i would use the Content Aware Fill and Vignette Removal depending on the overall composition and focal length. For this particular image i used all three options. The Content Aware Fill helped will filling in large areas of sky and also areas of the foreground and background.

The end results were slightly better than expected. There is some image distortion that can be easily fixed and since i used the Content Aware Fill most of the sky was automatically filled in. The resulting image is 12440×6559 pixels, which is larger in width than the Phase One XF IQ3. The main advantage with having the extra pixels and using the content aware fill, are more options for post-processing, cropping and repositioning the composition.

It may be worth experimenting with the Photomerge settings. Normally the auto option does a good job but you might be after a slightly more unusual image. Others settings include Perspective, Cylindrical, Spherical, Collage and Reposition. Each option will produce a different result so it really depends on works best.

Below are more images from around the site of Rijal Almaa.