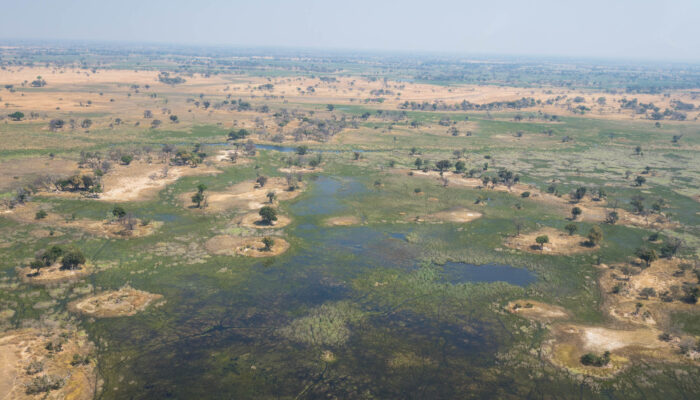 The Okavango Delta in Botswana, is the largest inland delta in the world. This intricate network of rivers, streams and tributaries originates from the Angolan highlands, across Namibia’s Caprivi Strip. The water flowing down to this vast habitat via the Okavango (Kavango) River ultimately evaporates as it blends in to the Kalahari desert.

The Okavango Delta is one of Africa’s last remaining great wildlife ecosystems, Africa’s Garden of Eden, and provides refuge to a huge concentration of Elephants, Buffalo, Hippos, Zebra and many other animals. In fact, Botswana boasts the largest population of Elephants throughout the whole of Africa, despite recent news of poaching within it’s borders. It’s estimated that around 180,000 elephants roam within the Okavango basin covering an area of 721,000 square kilometres, extending in to Angola, Namibia and Zimbabwe.

The delta is home to over 400 bird species, including the Pied Kingfisher, African Fish Eagle and Crested Crane. The bird population feed mostly on the 71 species of fish found within the wider ecosystem. The Delta was named as one of the Seven Natural Wonders of Africa in 2013 and became the 1000th site to be officially inscribed on the UNESCO World Heritage List.