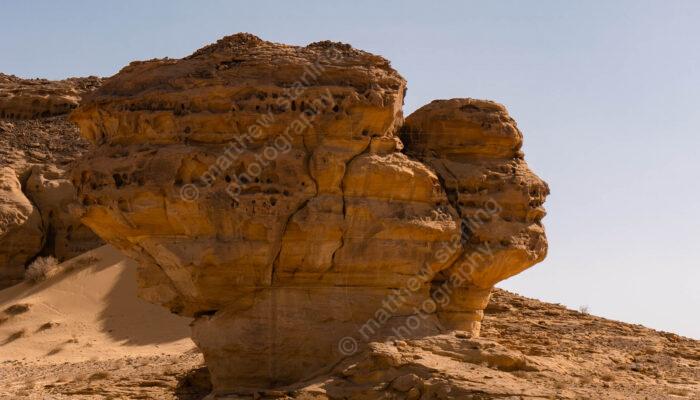 The Al Hijr site (Mada’in Saleh), was the first ever archeological site in Saudi Arabia to join the UNESCO’s World Heritage List. The majority of the remaining tombs date back to the Nabatean kingdom from around 4th century BC – 1st century AD. The site is the ancient kingdom’s largest and southernmost settlement after it’s main capital in Petra, Jordan. Nearly all of the visible ruins are in the form of rock-cut tombs, 131 in total, carved mostly during the first century AD.

Remarkable, mysterious and relatively under reported to the wider world, Mada’in Saleh is one of Saud Arabia’s main historical sites. It is situated close to another ancient settlement of Al ‘Ula in the Hijaz region of western Saudi Arabia, 500km away from the site of Petra.

The Hijaz region holds an important location within the desert, as fertile agricultural land is maintained by a plenteous underground water source. The area became a regular stop along the trade routes linking the southern Arabian Peninsula to Mesopotamia, Levant and Egypt. The strategic location gradually brought wealth to its inhabitants as civilisations developed around 3rd millennium BCE. The Thamud tribe, Dedanites, Lihyanites and The Nabataeans all prospered within these arable lands.

The walled settlement of Al ‘Ula, founded in 6th century BC forms an oasis within the desert valley, with plentiful fertile lands. The city formed an important site on the network of trade routes along the Incense Road. From the 5th to 2nd century BC the North Arabian Kingdom of Lihyan ruled the region. Their mark can be seen around the surrounding area such as the Lion Tombs of Dedan. A necropolis site of elaborate tombs dug into the side of Jebel Dedan, overlooking the eastern side of the city. The tombs approximately date back to the 5th century BCE, around the probable period of the Lihyanite rule over the region. The crudely cut square holes, around two meters deep, are positioned at various heights across the side of the mountain. The lion sculptures within the tombs are part of many iconic Mesopotamian influences over this ancient oasis.

Another major historical site in the region is the Lihiani Library (Ekmah). It is thought the Lihyan tribes used the rocks to etch their scriptures. The Lihyanite script dates back to the 6th-2nd centuries BCE. The Lihyanite alphabet was written right-left consisting of 28 consonants. A vertical line or two dots placed one on top of the other were used to separate words. Certain consonant-vowel combinations, known as ‘soft’ or ‘extended’ letters, were not depicted in Lihyanite script until the late Lihyan period, during the 4th and 3rd centuries BCE. Numbers were denoted by vertical lines repeated as necessary.

The Roman Empire invaded the Nabataeans from around 106 AD and began to destroy their kingdom, including the site in Petra. The Nabateans subsequently used Mada’in Saleh as their capital until the demise of their civilization.

From around the 13th century the old city of Al-`Ula was built re-using stones of the old Dedanite and Lihyanite ruins. Al-`Ula became the major settlement of the region until recent times, when inhabitants of the old mud houses were moved in to new modern dwellings.

Another historically significant feature of the Hijaz region is the Al Hejaz Railway. Built between 1901 and 1908 by the Ottoman Empire, the railway linked Damascus in the north to Madinah in the south. The railway network included a station in both Mada’in Saleh and Al-‘Ula. The original purpose of the railway was to maintain a connection between Constantinople, the historical capital of the Ottoman Empire and the site of the Two Holy Mosques of Islam within the holy city of Mecca, the destination of the annual Hajj pilgrimage. Construction of the railway network was halted due to the outbreak of the First World War. In July 1917 British bombers attacked Al-‘Ula Station. Armed forces led by Stewart Newcombe, a British engineer and associate of T.E Lawrence, conspired with the Egyptian and Indian armies to sabotage the railway. The station at Al-Akhdhar was also attacked with 20 Turkish soldiers captured.

After the war and following the Arab Revolt involving guerrilla forces led by T.E. Lawrence, the Arabian peninsula was carved up between the western powers of Britain and France, who were both keen to assume control of the railway. Over time, large sections of the track south of the border between Jordan and Saudi fell in to disrepair, and was unofficially abandoned in 1920. Ibn Saud took control of the Arabian peninsula in 1924. Since then there have been several attempts to revive the railway with no success.

The Al ‘Ula region is now heavily part of Saudi Arabia’s Vision 2030 project to help diversify the country away from the dependency of oil and gas exports. The Royal Commission for Al-Ula (RCU) has announced its vision to develop the area as a world heritage destination, centered around conservation and collaboration with the local community. The RCU commitment to the area confirms it as one of country’s most important archaeological and cultural destinations, as it prepares to welcome visitors from around the world, transforming in to a major hub for leisure and tourism.

Visitors to Al-‘Ula will get to explore incredible historical and geological sights including the Elephant Rock which lies 11km northeast of the province. At a height of 52 meters the natural sandstone formation takes the shape of an elephant with a thick trunk nestled in to the ground. It is also surrounded by canyons, geological formations and rock monoliths. A geologists dream come true.