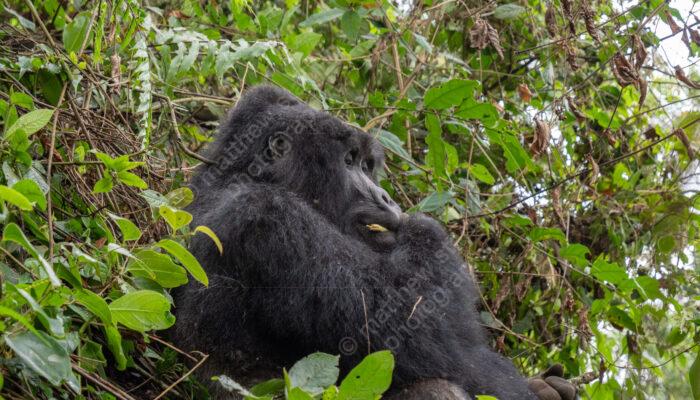 Unforgettable, tough, demanding and challenging. Just some of the ways i would describe trekking through the dense forest of Bwindi, home to around 400 mountain gorillas.

Before setting off we were all briefed by the chief park ranger about safety, general well being, protection of equipment and personal belongings. The general rule when approaching a group of Gorillas is to try and stay a distance of at least 10 meters at all times, unless they decide to come to you, when it’s advised to remain as calm as possible and avoid eye contact.

I went on this trip purely focused on the type of photos that i wanted to take. Unfortunately, you don’t have the luxury of picking the route or which family of Gorillas you will be tracking. I had high expectations, but this is Africa, so nothing is guaranteed despite the high costs, preparations and demands involved.

My main telephoto lens was the Leica 100-400mm (200-800mm full frame equivalent). Small, light and extremely portable in very difficult conditions. This was fitted to the Panasonic G9 capable of a maximum burst rate of up to 60 fps with the electronic shutter. For this particular trek I only used the slower burst mode to avoid waiting for the buffer to clear. Also, the gorillas generally didn’t move particularly fast, so it wasn’t necessary to use extremely fast shutter speeds.

One of the main benefits of the Micro Four Thirds system is the incredible in-body and lens stabilisation systems (IBIS), developed by the partnership between Panasonic and Olympus. When working in tandem the system provides up to 6.5 stops of image compensation. On occasions this allowed me to slow the shutter down to shoot at around 1/50s, avoiding higher ISO settings, while still achieving sharp and stable results, even at focal distances of up to 800mm full frame equivalent.

Currently 13 of the 15 resident families have been habituated for tourism. The Uganda Wildlife Authority (UWA) only grants 104 permits per day (groups of 8 per habituated family). Therefore, it’s advisable to try and book well in advance to secure a trekking permit for this unforgettable experience.

The mountain gorilla population in central Africa has increased by 25% since 2010. This is due to extreme conservation efforts to protect the gorillas from war, poaching and habitat loss. As few as 240 gorillas resided in the forests of central Africa during the 1980’s. After three decades of protection the overall population has now recovered to over 1000, according to the last census carried out in 2018.